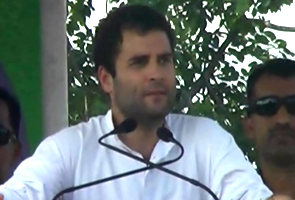 This was Gandhi’s first public rally in the urban center and the crowd clapped every time he attacked the CPI(M) in his hard impacting speech. Assembly elections in the state are due next year.

Asserting that the CPI(M) had been indulging in loot of central funds meant for the poor from the last 33 years, Rahul Gandhi said, “The Centre has been giving money worth Millions of rupees to Bengal under MNNREGA and various other schemes, but the money is being drawn off by the CPI(M) and not reaching the assigned poor people.

Forty five of the people in West Bengal do not even have ration cards, He said adding CPI(M) did not pay any attention to the needs of the common men, but worked for the profit of the party only.

Referring to his visit to China,Rahul Gandhi said senior Communist leaders of the country raised questions about the functioning of the Marxists in Bengal.

“They wanted to know what happened to the Communists of Bengal. They are still adhering on to old thinking of the ’70s and ’80s when the world is going forward.

Remembering that Soviet leaders had met his father Rajiv Gandhi when he was the Prime Minister, he said at that time Soviet Union was under Communist rule. Then one day he read in the news papers that Communism had been wiped out from USSR overnight.

“The day is not far off when the CPI(M) will be rooted out from the state,” rahul said.

“The 70 or 80-year-old ideology of the Communists, which has become obsolete and disused in the rest of the world, still exists in West Bengal and this exists for the CPI(M) too.

This is not for you,” he told the rally at “Shahid Minar maidan” organised to launch the membership drive for the state youth Congress.

Citing to the oft-quoted phrase ‘what Bengal thinks today India thinks tomorrow’, Gandhi said, “Now the rest of India thinks and the CPI(M) does not let you think.”

“The question is not whether CPI(M) remains in Bengal. That decision has already been taken by the people. The question is what we can do for the youth and I have been given an opportunity in the party in which youth find a place.”

He said when he had gone to UP five years ago, he was told that the Congress could not be revived in the state, but now the Congress has been rejuvenated in that state.

“Now they are saying that the next government in UP will be a government formed by the Congress only,” Rahul Gandhi said.

Indicating that the Youth Congress membership in Tamil Nadu had increased from 35,000 to 14.5 lakh after his visit to the state, Rahul said the Dravidian parties were now wondering how this has became possible.

Affirming that a similar thing would happen in West Bengal in the next four to five months, Rahul Gandhi appealed to the youths of the state to work together to fortify the organisation.

Rahul Gandhi, who dedicated his 12-minute speech to hit hard CPI(M) And We will see the change in Future there.