Rahul Gandhi will be revisiting West Bengal on Sep 14 to promote the Youth Congress membership campaign in the state, Announced by party o...

Rahul Gandhi will be revisiting West Bengal on Sep 14 to promote the Youth Congress membership campaign in the state, Announced by party officials . 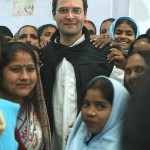 State Congress president told media on Saturday that Rahul Gandhi(RG) will start his tour from the campus of Vishwa Bharti University at Santiniketan on Sep 14. where he will address potential candidates for youth congress elections and congressmen from Block level to village panchayats and zilla parishads.

On that day he will also have a session with youths at Basirhat and Garden Reach in the outskirts of the city.

On September 15,Rahul Gandhi will address the tea workers and tribals at Jalpaiguri, Will speak at a Scheduled Castes convention in Coochbehar and also interact with youths in South Dinajpur.

Gandhi will finish off his tour Sep 16 by meeting families of murdered Congress leaders and potential Youth Congress candidates in Howrah, besides addressing a womenâ€™s convention and then travel to Garbeta in West Midnapore district to address a Scheduled Tribes political convention and take part in the youth workers from the adjacent parliamentary constituencies.

Rahul Gandhi has a great political charisma .Which is proving great for Binding India in one Congress.