Rahul Gandhi is the heartthrob of India: Sheila Dikshit

Mr. Gandhi, who was presented a saropa and mementos and sat with his head covered during the shabad-kirtan, said the nation was also proud of the Sikh community as it had “propagated India, be it in Canada, England or America”. He said the community members have always kept the national flag flying high wherever they have been.

Describing the monument as “beautiful and symbolic”, the Congress general secretary also thanked Delhi Chief Minister Sheila Dikshit for getting it made. He said the monument, which was well conceptualised and had been created after a lot of thinking and discussions, would continue to remind the people about the teachings and sacrifices of Guru Tegh Bahadur.

“The nation can progress only when everyone walks together hand in hand and that is what Guru Tegh Bahadur said 400 years ago. This nation does not belong to any one religion, any person or region. It is the nation of all Indians,” he said.


Ms. Dikshit said it was most appropriate that the memorial has been inaugurated by Mr. Gandhi as he was a young leader with a vision and it was his mother and Congress president Sonia Gandhi who had laid its foundation stone.

The Chief Minister also noted that Guru Tegh Bahadur has always been revered in Delhi as he had sacrificed his life here near Gurdwara Sis Ganj around 400 years ago.

She recalled how he sacrificed his life to protect human rights, freedom of expression and freedom of religion. 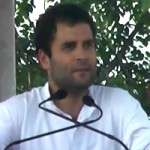