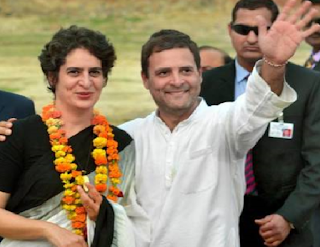 NEW DELHI: Rahul Gandhi and Priyanka Vadra, the Congress’ star campaigners, have intensified their public contact programmes in different parts of Uttar Pradesh as the election dates draw near in the politically crucial state.

Prime Minister Manmohan Singh and Congress President Sonia Gandhi’s tour programmes are yet to be finalised but a senior leader in the party said both leaders will be addressing at least one election rally in each of the seven phases starting from March 3.

While Priyanka Vadra today reached Fursatganj on a three-day tour of Chattrapati Shahuji Maharaj Nagar and Rae Bareli, Rahul will begin his tour of Bundelkhand region from tomorrow.

The AICC general secretary will also address a tribal rally in Sonebhdadra this week.

Priyanka Vadra three-day tour will be confined only to the Assembly segments falling in the Parliamentary constituencies of Sonia and Rahul Gandhi – Raebareli and Amethi – for the time being.

There are 10 assembly constituencies in Raebareli and Amethi of which seven are represented by Congress. Priyanka Vadra will again coming on Amethi tour from February 2.

Party sources say while Rahul Gandhi is on a whirl wind tour of the state spelling out party’s policy and programmes to electorates, Priyanka’s current tour is more related to rejuvenating the party workers and taking stock. Her public campaigns will start a few days later.

Rahul’s campaign this week focuses on Bundelkhand which has a sizable tribal population, for which the central government had announced a development package at his initiative last year.

He would start his campaign from Lalitpur tomorrow and then travel to and other districts before addressing a public meeting in Duddhi,Sonbhadra district, on January 21