“There is a work that my father had started, a dream he had dreamt. I come to you today saying…allow me to turn that dream into reality” 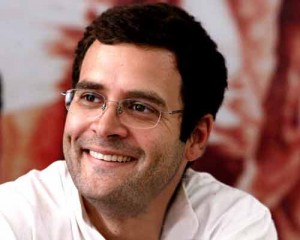 VADODARA: The Congress campaign for the second phase closed with a road show by All-India Congress Committee general secretary Rahul Gandhi in Vadodara on Friday.

Passing through all the three Assembly constituencies in the city, Mr. Gandhi charmed the people, particularly youth, shaking hands with bystanders and responding to greetings from the public. He also briefly addressed meetings in the segments.

Before arriving in Vadodara, Mr. Gandhi briefly addressed a public meeting in Limdi in Dahod district calling upon the people to throw out the Modi government which indulged in “false propaganda, doing nothing concrete for the people during the last five years of its rule.”

Calling upon the people to follow Mahatma Gandhiji’s principle of truth, he said Mr. Modi only made tall claims about development. “He told you that his government has given 34,000 acres of forest land to 45,000 tribal families, but the ground reality is not even one acre of land has been given to anyone. He announced about Rs. 15,000 crores welfare projects for the tribals, but not a penny was spend for it this year. He claims to have provided 24-hour power supply to the villages, but I am told here not even six hours supply is available.”

Rahul Gandhi on Monday called himself a “symptom” of the ills of Indian politics — dynasty, patronage, money — even as his stance on OBC quota in Central educational institutions as also safety of women in Delhi betrayed his unease with the functioning of two family loyalists, Union Human Resource Minister Arjun Singh and Delhi Chief Minister Sheila Dikshit.

In an interaction with girl students at a resort adjoining Jim Corbett National Park here, he termed politics as a “closed system” and said, “If I had not come from my family, I wouldn’t be here. You can enter the system either through family or friends or money. Without family, friends or money, you cannot enter the system. My father was in politics. My grandmother and great grandfather were in politics. So, it was easy for me to enter politics. This is a problem. I am a symptom of this problem. I want to change it,” said the AICC general secretary referring to his decision to introduce internal democracy and elections in the Indian Youth Congress and the NSUI.

It’s believed that the current caste-combination of Uttar Pradesh is such that it is unlikely the Congress will get a favourable verdict in any election in the near future.

Second, the deep analysis of the Bharatiya Janata Party’s romp in Gujarat points to the fact that mainstream parties cannot ignore issues of regional pride and provincial aspirations. Narendra Modi’s victory is much more about the political leader appealing successfully to regional pride than anything else. The Congress, which is against the formation of Telangana in Andhra Pradesh, is now seen to be diluting its basic line of ‘a stronger Centre for a cohesive India’, for electoral gains.

Gandhi, on a two-day visit to his parliamentary constituency, paid a surprise visit to Ban Purva Gaderi village late Friday night and interacted with villagers for over two hours. He also dined at a Dalit’s house there.

The villagers were taken by surprise by the blaring horns of Rahul Gandhi’s convoy, which arrived at 11 pm on Friday night.

The young MP requested two villagers, Lakhpati and Sumitra, for dinner after which the entire village rushed to welcome him.

Sumitra later said that while the dinner was being prepared, Gandhi interacted with the villagers in the ‘chaupal’ inquiring about their problems.

He told the womenfolk to work unitedly for their progress saying the real power of the country rested with them.

He assured Draupdi, Puja Manshavati and Roshni, all suffering from some ailments, of all possible help.

After having his dinner, Gandhi rested for some time before departing around 0130 am.

During his earlier tours also, the Nehru-Gandhi family scion had paid similar surprise visits to villages and dined there.